WOMEN IN LEADERSHIP: WHY IT MATTERS

An interview with Hati Colvin a Finance Director at Candy Kittens

This is the second in a series of interviews with leaders within M&A, Corporate Development and Finance focused on key issues and thought pieces.

Hati Colvin is a qualified finance leader with over 9 years’ commercial finance experience in the FMCG industry and 7 years’ PQE. Hati currently works for Candy Kittens, which was co-founded by Jamie Laing (Made in Chelsea) and Ed Williams. Candy Kittens is a rapidly growing confectionary business that launched in 2012 and sells vegan and veggie sweets with natural colours and flavours.

In this interview, Hati shares her thoughts on the challenges, benefits, and best practices for women in leadership roles. The number of women in leadership positions has gradually improved in the UK. In 2011, the government set a target that all FTSE100 boards should have a minimum of 25% female representation by 2015. In October 2015, the government announced that the target had not only been met, but slightly surpassed by 26%. By June 2019, this figure stood at 29%. A great fact about Candy Kittens is that 2 out 3 of the company’s management team are women.

Tell us about yourself and what your role is in the company?

I never intentionally meant to start a career in Finance. However, it all began when I worked in the accounts department of a construction company, where they offered me training in accountancy. Bear in mind, I didn’t have any office experience or have a university degree. After finishing the training course, I embarked in various finance roles and eventually settled in the FMCG industry.

I am now the Finance Director at Candy Kittens and began my role completely remotely (it was in the phase when everyone was adjusting to working from home). Six months into my job and as the pandemic progressed, I took responsibility for the operations department. I also lead on a lot of our legal, compliance and HR responsibilities. It has been a huge learning curve for me and stressful at times, but I’ve really enjoyed learning so many new skills.

What is your definition of a great leader?

My definition of a great leader is someone who inspires others to want to be their best. It doesn’t have to be someone that is leading you. I can think of two people that I don’t work with (as well as those that I do) that I consider to be great leaders who inspire me to do better at what I do.

On reflection, I asked myself how I try to be a great leader to my own team. I manage a team of four at Candy Kittens and we all recently went on our annual work trip. I received 3 thank you cards from my team members and their words inspired my answer below. The consistent feedback was that I provided them with support and gave them space to work independently.

There are three main leadership actions that I try to practice at work:

Autonomy to team members
I like my team to have control of their own work but I’m always there to give support when asked. It’s important my team feel like they can make their own decisions.

Guidance and direction
I prefer to guide and direct my team, rather than telling them what to do. I like to give clear objectives and suggestions on how to approach projects or challenges. I also believe that if you recruit well, your team should come up with better ideas than you, so I’m always open to hearing what they have to say.

Listening to constructive feedback
Taking time to listen to others is something I’ve been working on as I naturally like to do the talking. I try to make sure I invite feedback on myself – it’s not a process I find easy but learning and understanding feedback on yourself definitely helps you to be a better leader.

How did you reach your level of success, given the sector’s gender gap, especially among leadership?

There are many factors that have played a role in my success such as working hard and good timing with promotions. However, I think a lot of those factors would be the same for everyone, so I’ve tried to think about this a little deeper.

I would say my success has come from careful selection and being honest about whether the business culture is right for me. Not having a degree means some companies have overlooked me, even though my professional qualification and experience proved I was a good candidate. Throughout my career I have always taken a pragmatic approach to this, if a business rejects me on that basis, they weren’t the right business for me to join. I have applied the same logic to choosing the right business for me to grow and develop in. I haven’t got every career decision right, but I have been very lucky to have great support and career progression offered to me by many businesses I have worked for. I’ve benefitted from leaders or mentors that have seen my abilities more than my gender.

As a woman that chose not to have a family, I can’t ignore that this has also been to my career’s advantage. While there are many businesses working to support women that choose to have a family, I think this is an area where significant improvements could be made. One of the responsibilities we have in leadership positions is to find ways to reduce the motherhood penalty.

As a female leader, what has been the most significant barrier in your career?

One of the biggest barriers I’ve faced (and I know other women do too) is personality labels that are given to females particularly in senior positions. The labels used in the workplace can be: ‘too emotional’, ‘too sensitive’ or ‘too aggressive’. I find that women tend to be given labels more than men. I’m not saying that men never get labelled, but it definitely happens less often and in a different way.

I consider myself as having a big personality and I am an extrovert, but I also have a softer side to my personality. It has taken a long time for me to admit that I am actually very sensitive, and I didn’t want publicise that that because I thought it was a weakness. The reason I saw it as a weakness is because it’s often used and labelled as a weakness. I’m learning to be more comfortable with being sensitive, I actually think it is a big factor in why I have been successful in my career. I really care about what I do and I want to do it to the best of my ability.

I think we should be better at accepting that when it comes to people there is no one size fits all. It’s not about putting people into pigeonholes such as male and female or angry and over sensitive. Every person is different. As a leader you need to find the most effective ways of helping each individual acheive their best.

What advice would you give to the next generation of female leaders?

Firstly, focus on what you can bring to the team rather than what others say you cannot. That links to the labelling that women often get in the workplace – ignore it! Focus on recognising the things you have to offer, not what you don’t. Be self-reflective and open to feedback from those you trust.

Secondly, surround yourself with good male and female leaders you respect and who respect you. I have amazing female and male role models in my network that I go to for advice.

Lastly, learn to be resilient so that when things get difficult you can get back up again. Learning to be resilient doesn’t mean you can’t be sensitive, have feelings, be passionate about what you do or care about people. It’s quite the opposite. 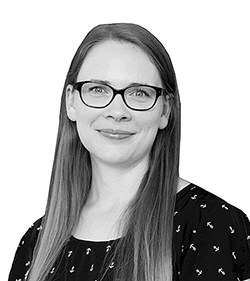 Statistics on Women and the Economy: