WHY THE WORLD IS STILL TURNING AFTER IR35

IR35 has been around for over 20 years and is by no means a new legislation in the public sector. However, on the 6th April 2021 the new off-payroll working rules finally came into force in the private sector, which many had been dreading for some time.

To prompt your memory, IR35 was introduced to ensure people who were working like an employee, but through their own limited company, paid broadly the same tax as someone employed directly. Previously, contractors providing services for organisations were themselves responsible for deciding their employment status for tax purposes. Now, the responsibility is on the employing organisations to assess a contractor’s IR35 status.

Get your ducks in a row

The contracting and recruitment world dealt with this in the public sector back in 2017. It was not particularly pretty. Blanket bans, walk outs, and a workforce that had become critical being demoralised and disincentivised almost overnight. It is fair to say many public sector organisations did not deal with it in the best way. Frankly, not understanding it and giving a good old knee-jerk reaction was the general modus operandi.

So, were lessons learned and did everybody have their ducks in a row in the run up to April 2020 when this implementation was put into the private sector? Well not really. Organisations with tens of thousands of employees were claiming they could no longer use contract staff or that the only possible determination was ‘inside IR35’. Often there was little to no sensible analysis of what should and should not be outside of IR35. The general feeling was that large organisations viewed their contractors as a necessary evil that had been dodging tax for far too long.

Deferred but not dropped

As a result of the COVID-19 outbreak, the Government deferred the implementation date of the IR35 changes until April 2021. It is fair to say that the pandemic has forced many of us to reset what we do and how we do it. But what about IR35? Was Rishi Sunak going to re-think this questionable change in application? Sadly or happily, depending on your point of view – no.

So here we are – it’s happened. Medium to large companies that engage off-payroll staff are now jointly responsible with the agency that provides that service for the correct use of personal services companies. And that’s the easiest way I can sum it up!

Yes, absolutely. It almost beggars belief that anyone (especially in senior HR roles in large businesses!) ever asked that question. Depending on the role it is simply a matter of how they get paid.

Yes. That’s a better question, but still one with a resounding yes as the answer is depending on the contract.

No. Again it looks like an umbrella on that one to. The point is they look like they are a normal payroll job in a team that needed cover and that generally falls inside.

No. If anybody thinks that’s the direction of traffic then sorry but they are naïve. FTC’s often pay perm salaries with no security or bonus. Doesn’t sound great does it? They need to be made financially attractive and that is rarely forthcoming

What does the future hold?

It’s clear that the changes unfairly affect some people more than others, especially people doing ‘cover’ roles who are at the lower end of the food chain, and they have had this benefit taken from them. Higher paid contractors, however, are often more independent and hold more power – they can therefore much easier pass the test to look like a consultant. So, the more power you have, the less tax you can pay.

More than ever, projects need to get done and contractors are very much needed. Businesses need to transform, businesses will be bought and sold, companies will list, financial records need to be improved, houses built, IT implemented and yes, people will still be getting pregnant!

For clients it is a matter of getting the numbers right to make sure it is attractive for great people to want to do the work for you, alongside whether it is inside or outside of IR35. Those numbers need to be more than a permanent member of staff, otherwise why on earth would somebody bother. Talk to a decent recruiter and they should be able to help with that.

For candidates it is a matter of working out what matters most to you about a contract – and that goes far more than money. Then having a good chat with your recruiter to achieve what you want to achieve.

Suddenly it all sounds normal again doesn’t it? For many this will be a scary change and some will currently be out of contract and unsure about what the future holds. I genuinely feel for all of you. Whilst this did not need to happen, it has, and we all need to adapt to the change. Like everything in our world right now, that ‘next’ normal is just around the corner. All the signs say that the contracting world is bouncing back big time – and we can get back to doing what we all do best.

If you’d like to discuss your contractor hiring requirements, please do get in touch with Steve Clarke at steve.clarke@phippscameron.com

Steve has over 15 years of experience recruiting Senior Corporate Leaders, predominantly within Finance, for a wide variety of sectors. He has worked in London as well as the Middle East and prides himself of delivering the highest possible levels of service with minimum fuss. His recruitment style is suited to Interim as he works quickly and efficiently, providing solutions through consultation based on a thorough understanding of need. Steve leads our Interim offering across PCR specialisms of Financial Leadership, Transformation, Strategy and M&A. 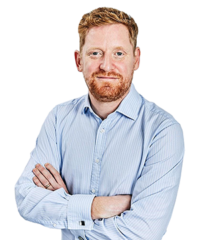